by Harold Pollack in Practice News 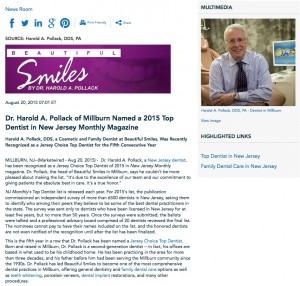 Harold A. Pollack, DDS, a cosmetic and family dentist at Beautiful Smiles, was recently recognized as a Jersey Choice Top Dentist for the fifth consecutive year.

Millburn, NJ – Dr. Harold A. Pollack, a New Jersey dentist, has been recognized as a Jersey Choice Top Dentist of 2015 in New Jersey Monthly magazine. Dr. Pollack, the head of Beautiful Smiles in Millburn, says he couldn’t be more pleased about making the list. “It’s due to the excellence of our team and our commitment to giving patients the absolute best in care. It’s a true honor.”

NJ Monthly’s Top Dentist list is released each year. For 2015’s list, the publication commissioned an independent survey of more than 6500 dentists in New Jersey, asking them to identify who among their peers they believe to be some of the best dental practitioners in the state. The survey was sent only to dentists who have been licensed in New Jersey for at least five years, but no more than 50 years. Once the surveys were submitted, the ballots were tallied and a professional advisory board comprised of 20 dentists reviewed the final list. The nominees cannot pay to have their names included on the list, and the honored dentists are not even notified of the recognition until after the list has been finalized.

This is the fifth year in a row that Dr. Pollack has been named a Jersey Choice Top Dentist. Born and raised in Millburn, Dr. Pollack is a second-generation dentist – in fact, his offices are based in what used to be his childhood home. He has been practicing in the area for more than three decades, and his father before him had been serving the Millburn community since the 1930s. Dr. Pollack has led Beautiful Smiles to become one of the most comprehensive dental practices in Millburn, offering general dentistry and family dental care options as well as teeth whitening, porcelain veneers, dental implant restorations, and many other procedures.

Dr. Pollack says the consistent recognition by his peers in New Jersey always serves to reinforce his commitment to giving each of his patients the best treatment experience possible. “We work very well with our patients, and we believe communication is key. Ultimately, it’s nice to be acknowledged for the hard work, education, and dedication that’s espoused by our entire team at Beautiful Smiles.”

About Harold A. Pollack, DDS

Dr. Harold A. Pollack has been a practicing dentist for more than 35 years. He is a Fellow of the Academy of General Dentistry and a Charter Member of the American Academy of Cosmetic Dentistry’s New Jersey Chapter. Dr. Pollack is also a member of the American Dental Association, the New Jersey Dental Association, and many other respected dental organizations. A graduate of the Temple University School of Dentistry, he has accumulated more than 4,000 hours of continued dental education. In addition to being a Jersey Choice Top Dentist, New Jersey Family Magazine has previously recognized Dr. Pollack as a “Favorite Kid’s Doc.” He has also been selected as one of “The Best Dentists in America.” Dr. Pollack is available for interview upon request.

To learn more about Dr. Harold A. Pollack, please visit beautifulsmilesnj.com or facebook.com/drharoldpollack.